The Lowdown on Lowbrow 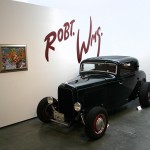 This video documents the initial construction of Prosthsis a 5 meter walking machine being created in Vancouver Canada under the direction of Jonathan Tippet. Video by Marcus Rogers

EatArt recently took the MondoSpider electric walking machine to Washington DC to participate in a parade! It was a long drive and the machine performed flawlessly.. if only humans were so well engineered!

12midnite and Jen Abrams tell us about the newly re-opened SMASH gallery of modern art in Vancouver located at 580 Clarke Drive.

Jonathon Tippet of EatArt in Vancouver gives us an update on the groups Activities and a tour of the work in progress. Prosthesis, Titanaboa, Quickfix and the EatArt Annual Wavelength party

EatArt is creating a 5 meter walking machine under the guidance of Jonathan Tippet. Located in Vancouver BC.

Artist 12 Midnite talks about his neon work and new show at Vancouver’s Smash Gallery. 12 Midnite has been a

Ken Gerberick is a Vancouver Assemblage and Art Car Artist. He gives us a tour of his studio